NARBA has long stood as the best source for timely, curated updates on rare birds. Big Year birders rely on it for timely updates on species that might only appear once during a calendar year while other birders use it to fill out their ABA lists or learn about rare birds that show up nearby.

A membership provides you with one year of unlimited access to our curated rare bird alerts, as well as email updates when new and notable rarities show up.

Our goal is to continually improve the service and provide more detailed information about the birds you are most interested in.

Brown Booby in NY and VT

A Brown Booby is sitting on the water on the north side of the Champlain Bridge at the Crown Point State Historic Park. It has been moving back and forth from the VT and NY side of the Lake.
It continued to be observed through at least the late afternoon in the same area. It was off-shore quite a distance at points. 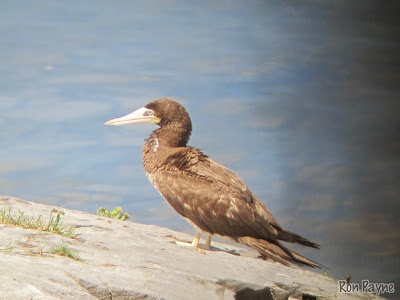 Continuing this morning near the Champlain Bridge.

Around 3:30 pm it headed north, out of view. It was later refound at the Westport Boat Launch where it stayed until about 4:30pm. It then flew off toward Button Bay, VT and has not been refound yet.

The operator of one of the ferry's that goes between Charlotte and Essex on Lake Champlain reports seeing the Brown Booby at 5:30pm as he was leaving Essex.

The Brown Booby continued on to a sandy patch of shoreline in Essex where it is believed to have landed.

At 10:15 the Brown Booby was seen at Noblewood, flying south in the direction of Essex.

The Lake Champlain Brown Booby was relocated on a green buoy near the Vermont shore, then feeding with gulls and diving near 4 Brothers Island.

Flying south past Shelburne Farms which is on the Vermont side of Lake Champlain. It made a couple circles then flew off again to the north.

OR
reported by John Sullivan

BC
reported by Raymond Ng

OR
reported by Mark Nikas

BC
reported by Keith Taylor

OR
reported by John Sullivan

BC
reported by Keith Taylor